Posted by geoffmead on February 25, 2017
Posted in: Uncategorized. Leave a comment

Captain Midnight here from the heart of Cornwall.

We’re spending a few days in the land where Himself and Herself were born, twenty miles and a few years apart. As you can see, they forgot to bring an alarm clock so naturally I help out in the mornings.

They seem to be on some kind of religious quest, stopping every five minutes to ooh and aah at old buildings and bits of stone. I’d understand their enthusiasm if we were up north where I come from, but you can’t even get a decent pint of stout down here.

Don’t get me wrong, they’re friendly enough but they all seem to think my name is Ansum. “Look at ‘im,” they say. “He’s Ansum,” or else they get over-familiar and take liberties: “Alright, my Luvver?”

The beaches are good though and I’m training Herself to manage the two-ball trick (throw one, catch one, bring one back, drop one, throw the other one). It’s pretty advanced stuff but she’s quite bright and I’m optimistic that she’ll have cracked it in a month or two. 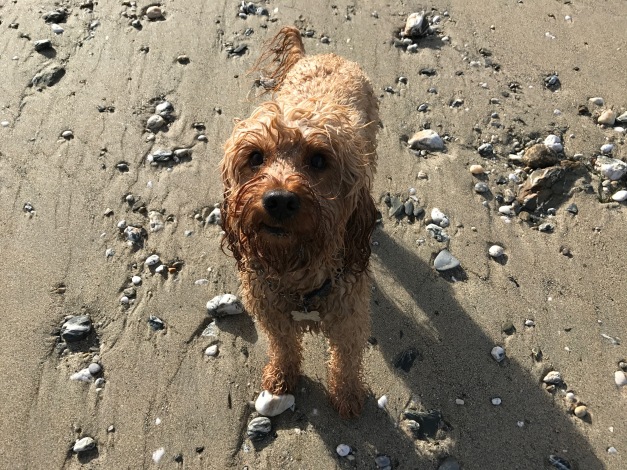 I’m also told that the pasties are excellent. I only have it on hearsay because (as those of you familiar with this blog will have anticipated) not a morsel came my way. They sat there last night, stuffing their faces with huge lumps of steak and pastry (from Warren’s Bakery in St Just: The Oldest Cornish Pasty Maker in the World) but nothing for me except dog biscuit and a scrap of tasty topper.

Got to stop now because Himself says we’re going out dreckly.

I’m think he means quite soon but you can’t be certain.

A Murder of Crows

Posted by geoffmead on February 14, 2017
Posted in: Uncategorized. Leave a comment

The crow was dead. No doubt about it.
The dark-feathered wreckage of his body
proclaimed his undeniable demise.

The corpse preternaturally displayed
to public view, half way up a tree,
wings outstretched, as if caught in flight.

A sovereign perhaps, deposed by his foes,
cursed by Corvid law to die an outcast
stripped of title, lands, and crown.

Had he tumbled like a de-frocked cleric
from his lofty pulpit to breathe his last,
impaled on a branch in sight of the ground?

Or been tried for some imagined crime,
a malefactor condemned by the mob,
crucified like Saint Peter, upside-down?

None stepped forward to testify the truth
of this gruesome death and fealty forsworn,
and none (save I) stayed back to mourn.

Posted by geoffmead on February 10, 2017
Posted in: Uncategorized. 3 Comments

In Kingscote Woods I saw today,
shrugging off their leafy shroud,
a choir of snowdrops standing proud.

Heads meekly bowed in silent prayer
like angels who had journeyed thence
to greet us with their innocence.

And further down the track I found
ablaze with green and yellow light,
a patch of winter aconite.

Soon the bluebells in their turn
will from the fecund earth bring hope
to soothe this weary misanthrope.