Posted by geoffmead on July 3, 2016
Posted in: Uncategorized. Leave a comment 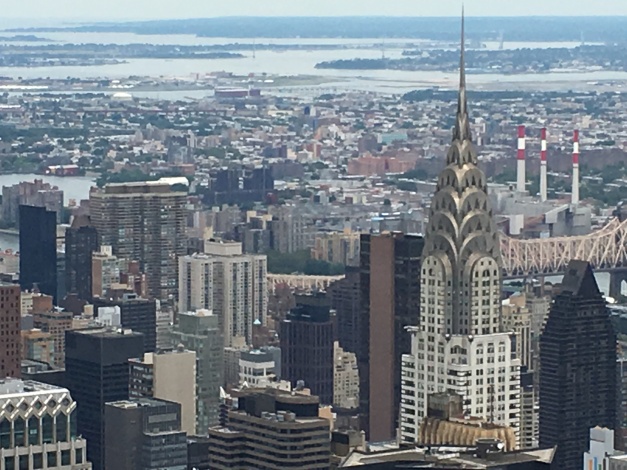 So good, they named it twice.

It’s the best part of fifty years since I first came here as a student in the 60s and I’ve been back many times. Chris and I came quite often to stay with our friends Dick and Karen, and two days ago I was a guest at their wedding at the NYC Marriage Bureau and at Trestle on 10th Avenue for the party. It’s been a long time coming (they’ve been together for 20 years) and maybe our own wedding and Chris’s illness and death gave them a nudge.

Yesterday, I visited the 9/11 Memorial Plaza. It’s said that we don’t do grief well in western society, but this memorial is stunning in its simplicity and profundity. Within the footprints of the Twin Towers, two massive acre-square waterfalls cascade thousands of slender streams, combining to form sheets of water that are gathered and held briefly in pools 30 feet below, before plunging deep into the earth. At the perimeter, the names of all the known victims are etched into bronze tablets.

It was on the day after 9/11 that Chris and I, who had been friends for some time, reached out to each other and became more than friends, so although we didn’t lose anyone we knew, the event had some personal significance for us. I went back this morning clutching a single stem of Gerbera which I offered in memory of those who died in the attack and in memory of the time Chris and I were together in the years that followed.

Then I caught the subway to Penn Station and walked along 34th Street to the Empire State Building. I wanted to do something that Chris and I had not done together in New York, to symbolise the arrival of new energy and new love in my life. It took an hour to get up to the observation deck on the 86th floor, but the view of the city and the sense of limitless possibility it exudes, made the queuing and cramped lifts worthwhile.

As I looked downtown at the gleaming One World Trade Centre, I recalled that, out of the smouldering rubble of the Twin Towers, workers rescued a badly damaged Callery pear tree. With loving care, it has thrived, been replanted in the Plaza, and christened The Survivor Tree. It stands as a modest reminder of the universal impulse for life in the aftermath of death.

So, I’m flying home this evening in good spirits, with love and gratitude for all that Chris gave me, and with high hopes for what the future might hold.