Posted by geoffmead on November 16, 2016
Posted in: Uncategorized. Leave a comment

I must say it’s very decent of Himself to lend me his glasses so I can scribe another bulletin from the frontline of domestic life, which is just as well as He seems to be more interested in canoodling than writing these days.

He’s spending a lot more time in London. I go with him of course to make sure he doesn’t get into too much trouble. I’ve even been on a thing called the London Underground (so-called because it goes under the ground – how wildly imaginative you humans are). I didn’t like it much: lots of people with big feet, not looking where they were going; it’s a wonder they didn’t tread on my tail.

There are lots of houses in London and a distinct lack of fields. Mostly I walk Himself on the pavement but we went to a park yesterday so I was able to let him off the lead for a while. I swam in the duck pond and then stood guard outside the café as he had a flat white.

I’ve no idea what a flat white is (except that it isn’t flat and it isn’t white) but it must be very precious because he muttered something about costing more than a week’s worth of dog biscuits as he handed over a fistful of coins to the man behind the counter in return for a miniscule container of warm brown liquid. The man spoke quietly but I heard words such as artisanal, organic, single estate, tasting notes, hand-roasted, and hipster.

Posted by geoffmead on November 6, 2016
Posted in: Uncategorized. 5 Comments

I never met Chris’s dad, Jim. He died when she was only 28, long before we got to know each other. Today, I drove with Ted to the crematorium where Jim’s ashes had been scattered, to meet Chris’s sister Helen and her mum Joan. They had brought a spring-flowering plant and a trowel and I handed them a container of Chris’s ashes for them to perform their own rite of farewell.

Ted and I waited in the car as they went off into a wooded area, beyond our sight. They’d asked for privacy and I understood that this time I needed to stand back and allow Chris’s immediate family the opportunity to say goodbye in their own way. They returned half an hour later, chilled by the damp autumn weather but smiling.

“Would you like to come and see?” replied Joan.

I followed them back up the path to a stand of silver birches.

“Look,” said Joan. “This is the same place we scattered her dad’s ashes.”

“We put some underneath and scattered the rest,” said Helen, pointing to the newly planted Osmanthus Burkwoodii. It took a bit of doing I can tell you; the ground was as hard as a brick.” 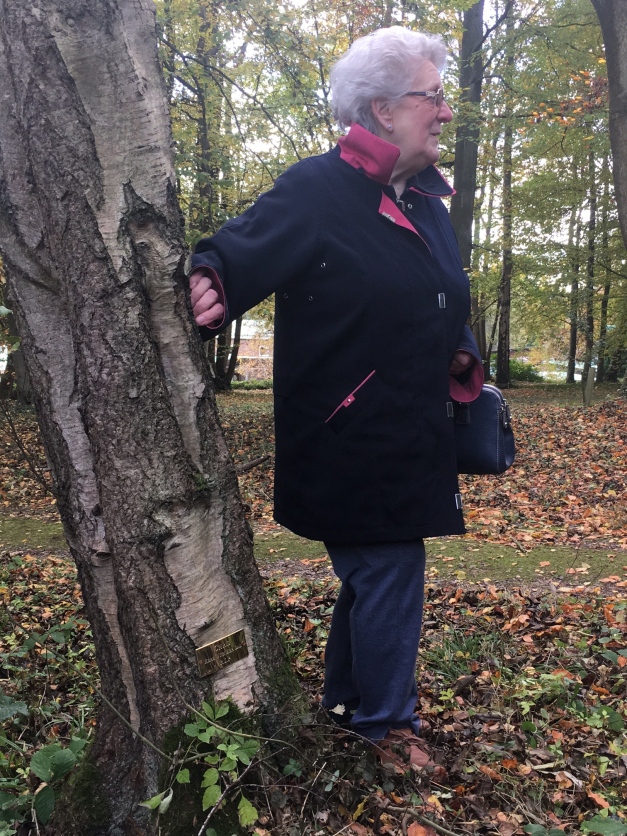 “And we put this up,” said Joan, indicating a small brass plaque which read:

CHRIS
HERE WITH HER DAD
R.I.P.

After a little while we went to a local pub for Sunday lunch and then Helen left for Manchester and I drove Joan back to her home in Stratford-Upon-Avon. As we made our way north, she turned to me in the late afternoon half-light and said quietly:

“Chris loved her family – all of us. But she adored Jim. The two of them used to go skiing most years, you know. She was a Daddy’s Girl, really. I’m very glad they are together again.”