Posted by geoffmead on April 17, 2017
Posted in: Uncategorized. Leave a comment 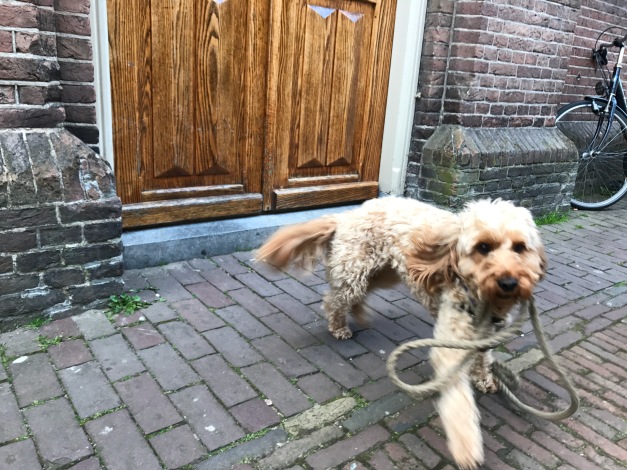 International dog-about-town Captain Midnight here, reporting from the mean streets of Utrecht. Herself was very keen for me to come and meet her Dutch family. I’m pleased to say that they are a friendly bunch and have made me feel very welcome.

Himself would have pined if we’d left him behind in England so we let him come along as well. But he’s a country boy really, not much used to traffic (especially all those bicycles) and a bit prone to panicking and dashing off after pigeons. So, as a precaution, I’ve been taking him everywhere on the lead. It’s also coming in handy to stop him jumping in the gracht.

That’s Dutch for canal, by the way, for all you monoglots.

Walking on the lead is an important skill. It takes a bit of practice but it’s worth the time and effort required to train your human. Mine is coming on quite well although his performance does still leave something to be desired.

He usually obeys direct commands but I don’t think Himself actually understands the practical implications of being joined to another creature by a piece of rope. Namely, that the arrangement works best when both are heading in roughly the same direction at roughly the same speed. Also – obvious though it may seem to you and me – that it is not possible for us to pass a lamppost on both sides at once.

He can generally be trusted not to run off when we get close to home so I sometimes let him off the lead to make his own way indoors. He looks so pleased with himself when he finds the right front door that I wag my tail to tell him what a good boy he’s been. Positive reinforcement and lots of encouragement are, as we know, the keys to successful training.

So long for now, superdog fans.