It was, by my faith, the same weather as today: a light sea, no breeze, a sky as fine as silk. I was out fishing alone, anchored off Gueltraz – over there to our left. It was dead calm. The sun was beating down.

Towards midday I had a crust to eat. I decided to take a siesta and wait for the tide so I lay down full-length on the deck. I was just going to sleep when all of a sudden, a pretty voice – a delightful woman’s voice – began to sing all around the boat. Never had I heard anything so beautiful. I didn’t understand what she was saying but I could have listened to her until the end of time. It was a song of such sweetness…

You cannot imagine how gentle it was and how it caressed the heart. I raised my head and saw hands of white and pink holding the sides of the boat. Then a face appeared, a face the colour of the moon with long hair the colour of the sun. I remembered what I had heard the old ones in the village tell – stories I’d always refused to believe. It was perfidious Ahès – daughter of good King Grallon, transformed into a Morgane when her city sank beneath the sea – leading me to a sleepy death with her siren-song. The boat rocked me like a cradle. I could feel the charm working on me. Somehow I found the strength to mutter a prayer to the Holy Mother:

Our Lady of Port-Blanc, you who to defend your territory, in days long gone by, changed the very rocks into soldiers, save my soul and my body too, if you can!

Still, I was overcome by drowsiness. I dreamt that I was laying on a velvet bed with green curtains waving back and forth before my brow. That was the last thing I can remember. I was picked up – half-drowned – by the Marie-Louise, a lobster boat, sailing out of Cherbourg. As for my boat, which had cost my father a hundred écus, I’d lost it and I’ve never owned another since. Here I stand – Lôn Vraz – just a humble sailor working for any skipper who’ll listen to my story.

Perfidious: disloyal, treacherous, deceitful, dishonest, base, low. A woman with a reputation. Not someone you’d invite home for tea to meet your parents. How did she get such a bad name? I’ll tell you.

Long ago in Brittany, there lived a powerful war-loving king called Grallon. He had pillaged far and wide and amassed a great fortune. He’d known many women – usually at the point of a sword – but had no wife. One day, when he was out walking alone, he met flame-haired Malgven, Queen of the North. “My husband is old,” she said. “His sword has rusted. Let us kill him and I will be your bride.” Grallon was smitten by her cruel beauty. He had found his match at last.

It was soon done but the people were loyal to their old king. Grallon and Malgven were forced to take ship and flee. They spent so long at sea that Malgven gave birth to their daughter Ahès before they reached dry land. The birth was difficult and it cost Malgven her life. That is how Grallon arrived back in his own country of Kernev with a daughter but no queen. The child grew into a woman. She looked exactly like her mother. Grallon could deny her nothing. Whatever she wanted, she demanded. Whatever she demanded, she got: dresses, jewels, servants, men, palaces, a city by the sea.

Grallon built for her delight, the city of Ys whose shining towers, luxurious gardens and marble halls exceeded even the fabled opulence of ancient Babylon. Low-lying Ys was protected from storms and tides by a gated harbour large enough for a whole fleet of ships to anchor within its stone walls. The gates were the only weak point in the city’s defences, so Grallon kept the keys to their locks securely beneath his own pillow.

In this earthly paradise, Ahès dressed herself in silk gowns; adorned her body with golden ornaments; and feasted on larks tongues and persimmons. She drank fine wines and rare spirits; she dined and danced every evening with the most beautiful young men and women of the city and each night she took a new lover to her bed. Her immodesty and yearning for novel sensations were boundless. Woe betide anyone who refused to join in her libidinous debauchery.

Now, Grallon had three beautiful nieces at court, named Ysol, Ellé, and Milla who were as virtuous as nuns and as pure as driven snow. Their very existence was a rebuke to the lecherous princess. One day Ahès went to see the king: “Father,” she said, offering her forehead for him to kiss. “It grieves me to tell you that your nieces have insulted your daughter.”

“What in the world have they done, my dear?” asked Grallon.

“It’s just too awful, I couldn’t possibly tell you,” sobbed Ahès, summoning hot salt tears as she clung to his neck.

“Poor girl,” said Grallon. “They are yours to punish.” He unwound Ahès’ arms from his shoulders and left the room to seek out and imprison his nieces, which allowed Ahès to creep into his bedroom unobserved and steal the keys to the harbour gates.

Three days earlier, an Indian Prince, whose ship was anchored beyond the harbour wall had promised her diamonds from Golconda, each as big as a hen’s egg, if she would open the gates for his ship. She lusted after the jewels and she saw a chance of ridding Ys of her nauseating cousins. She would give them as slaves to the Prince.

That evening, unkown to the king, she opened the harbour gates, let in the Prince’s ship and brought him ashore for a great feast in her palace, with the promise of another night of oriental passion to follow. They feasted and danced by the light of a thousand candles quite oblivious to the gathering storm far out to sea. The Prince took out three enormous diamonds, flashing like fire, from a bag at his waist and wound them in Ahès’ hair. She laughed like one possessed by demons and presented in return her three virgin cousins, shackled as slaves, for her lover to enjoy. Meanwhile, the distant storm raised huge waves and sent them racing towards the unsuspecting city.

As King Grallon dined alone in his palace, a man wearing a monk’s habit with a white cross on his chest, burst through the door and stood before him. “Grallon,” he said. “You lose your city. Save your soul.”

“If there is danger, I must warn my daughter,” said Grallon.

“My nieces then. Surely we must warn them.”

“Your dear sweet neices,” said the man. “Ysol, Ellé, and Milla. Even they cannot be reached in time. Save your own soul.”

Grallon followed the man out into the night. The storm howled. Waves crashed through the harbour gates and smashed the fleet to matchwood. The sea poured into the streets of the city engulfing everything in its path. Inside her palace, Ahès heard the commotion. “What is this?” she said.

“It is the anger of the Lord,” said the three virgins. “Repent.”

“The ocean is also feasting,” said the Indian Prince with a wild gleam in his eye.

At this, the sea poured through the windows and doors of the palace. “Then drink me, King’s daughter,” the water roared. “Drink me.”

Water, water everywhere. But where had it come from? Then Ahès realised the truth. She had been so anxious to get her hands on the diamonds that she had forgotten to shut the harbour gates after she let in the Prince’s ship.

She turned to run but the Prince clasped her in a vice-like grip. His eyes burned like coals and he laughed as the water rose above their heads. It was the devil himself who took Ahès down to her watery fate. She did not drown; a quick death like that would have been too merciful. Instead, the devil transformed her into a Morgane – a siren – condemned for all eternity to be loathed and reviled for luring men to their deaths, she who once lured them to her bed.

Grallon saw his beloved city of Ys sinking into the sea. He mounted his horse, and rode with the monkish man at his side on a donkey, pursued by the encroaching surf, to high ground far inland. It was morning by the time they reached the peak of the mountain. When Grallon looked back, the sea was calm once more. Ys was gone, sunk beneath the waves. Of the stone towers, golden domes and jagged ramparts that had once stood so proudly there was no trace.

Freely adapted from The Ladies of the Night, translated by Erik Stohellou from Paul Feval, Romans enfantins. Paris, E. Ducrocq, 1862

Other versions of the story also insist that Ahès was punished by a righteous God for her wickedness and tell how, when her father tried to save her, the ocean would not let her go, or that a voice from the sky told him to relinquish her, or that St Gwennole drowned the pagan princess so that God would calm the stormy seas. This 1884 picture The Escape of King Gradlon by Evariste-Vital Luminais (Musee de Quimper) gives you the general idea: good Christian men heroically sacrificing a wicked, loose-haired, pagan woman. 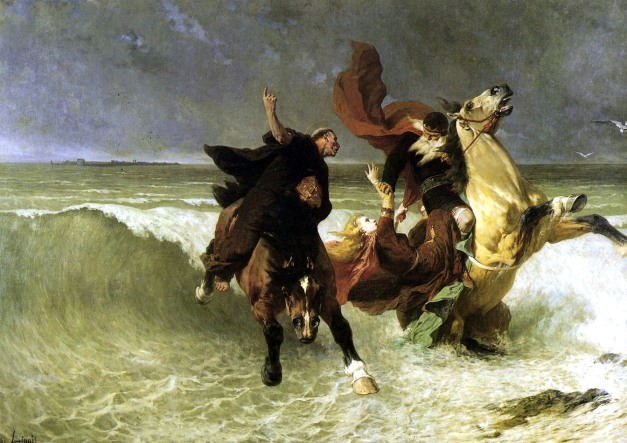 What we do know is that these stories originated when the westward expansion of Christendom was hitting up against the pagan kingdoms of northwestern Europe such as Cornouaille (Kernev). Conversion of the local king was always a prime objective and that would certainly explain how an adulterous regicide became known as “Good King Grallon.”

Some say that Dahut-Ahès was a Breton princess/priestess/goddess who symbolised the abundance, fertility and passion of the sea. Like other aspects of the Great Goddess, she and her followers were persecuted by the church and newly-converted Christian rulers for their sensuality and attachment to nature. To escape this persecution it is said, she retreated to the city of Ker-Ys which was hidden under the sea beyond the realm of human knowing until such time as she and her kind would be welcomed in this world once more.

I like to think that it was this manifestation of Ahès that the present-day Breton designer Pierre Toulhoat had in mind when he created this silver brooch, bought for me by my wife Chris Seeley as a memento of our story-hunting trip to Brittany a few years ago.

It’s in the nature of storytelling that all of these stories co-exist: the mermaid-siren; the perfidious princess; the persecuted pagan. They are all good tales to tell but I know which I prefer to believe in. Which, I wonder, do you?