And They Called it Puppy Lo-o-o-ve 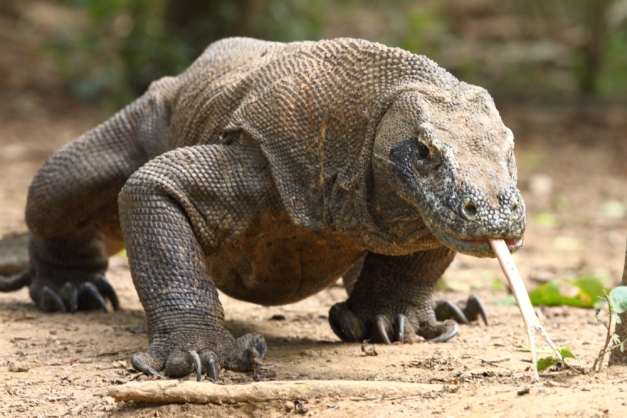 Readers of this blog may have noticed me waxing lyrical about Ted, our Cockerpoo puppy. That’s not him in the picture, of course. That’s a Komodo Dragon. But, back to Ted.

Filming him in slo-mo (see previous blog); asking his opinion about all matters personal and business; looking forward to our walks as the highlight of my day; adjusting my sleep rhythms to match his; having separation anxiety when I leave him to go to work; hearing the dream-boat lyrics to Paul Anka’s Puppy Love going round and round in my head. I’m a goner, alright.

But being a thinking kind of chap, I’ve been wondering why a 64 year old human being should fall in love with a small dog. I’ll come back to the Komodo Dragon later, I promise.

What Ted and I share (apart from a love of vintage wine, a fondness for the later novels of Ursula K Le Guin, and two souls destined to be as one) is a mammalian brain. Therein, I suspect lies the true source of our inter-species love affair.

Mammalian offspring are the most vulnerable and dependent in the natural world; to enable the parental and family bonding without which we would not survive infancy, we have developed a unique capacity for what Daniel Goleman calls emotional intelligence and the rest of us call love. I’ve fallen in love with Ted because I’m programmed for it; the little bugger presses all my buttons because he intuitively knows – from birth – that the key to his survival is his vulnerability. It’s the one strategy available to mammalian young and it’s a matter of life and death.

It was in the 1960s – at about the same time, as it happens, that Paul Anka first serenaded us about the trials and tribulations of young love – that a certain Dr Paul MacLean popularised the idea of the triune brain. He told us that during the long process of evolution, we mammals supplemented our instinctual reptilian intelligence with a new area of the brain called the limbic system, responsible for processing the emotional requirements of live reproduction and nurturing.

Hence, all human beings – and dogs – provided they are well-enough parented have a profound and immensely subtle command of emotional experience and expression. Later still, said MacLean, we developed a third area of the brain: the cerebral neo-cortex dealing with the “higher” functions of language, abstraction and planning. The neo-cortex is present in all mammals and especially well-developed in primates and big-brained homo sapiens. Not so much in dogs, which is why although Ted knows on which side his bread is buttered, he can’t make toast.

It also explains why it’s hard to love a Komodo Dragon. Poor old reptile, it never even evolved to the second stage of development: no limbic system and zero emotional intelligence. A Komodo’s offspring depend for survival, not on parental love, but on running up trees so they don’t get eaten by mum and dad (who assume that – vulnerable or not – if they move they must be food). For similar reasons, they don’t make very good pets.

Anyway, enough of this distraction. Have I told you about Ted recently? We went walking on the beach at Lyme Regis late yesterday afternoon and he met a delightful hound called Diva. Even though I felt a pang of jealousy, I loved watching them gambol among the seaweed and the lapping waves; the sun shone bright yellow in a clear blue sky; my heart soared like the seagulls overhead…