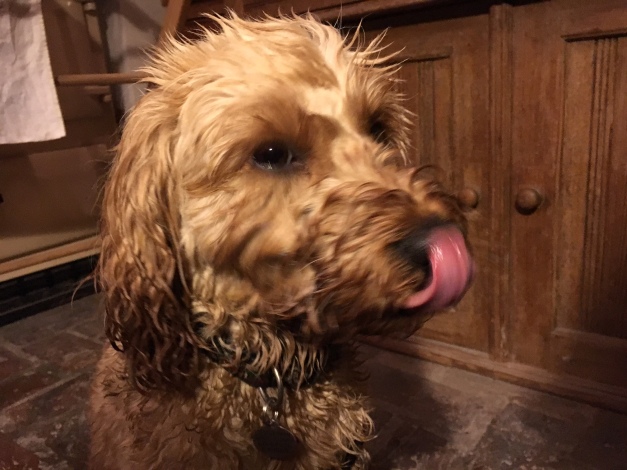 Captain Midnight here reporting from the wilds of rural Gloucestershire.

Himself woke up late this morning. In fact I had to jump on him before there was any sign of life. I had my usual biscuity breakfast and a quick constitutional to the end of the village and back. Then we settled down in the upstairs office. He bashed away at the computer for hours while I took it easy on the sofa.

Things got more exciting when I dragged him out at dusk to the fields behind Kingscote Church for a walk. We bumped into a neighbour and I had a bit of a gambol with my young Golden Retriever friend Tilva while Himself yacked on with her human, then we were off…

While he lumbered along in mud-caked boots, I rolled in fox poo and chased several pheasants. Then I ran after a hare across the ploughed field and into the woods. If Himself hadn’t called me back I’d have had him. Later, as it was getting really dark, I saw two of those big deer things with horns. Gave them a good run for their money, I can tell you.

As if that wasn’t enough excitement for one walk, I came across the carcass of a bird. I think the pheasant murderers had left it behind and while I don’t approve of shooting things, it was pretty ripe and completely irresistible.

I crunched it to bits and ate the lot, feathers and all. It tasted fantastic, which is why I’m still licking my chops in the picture above, taken when we eventually got home. He insisted on giving me a shower, then lit the fire in the sitting room and we both had a bit of a doze.

In the immortal words of Lou Reed, it’s been a perfect day.