Days of Future Past

Posted by geoffmead on May 17, 2020
Posted in: Uncategorized. Tagged: Captain Midnight. 1 Comment

Captain Midnight here dreaming of days gone by and better days to come.

This is where I used to go before lockdown, when Himself was still traipsing around the country ‘working’. You can imagine that it took some effort to drag myself away from the lovely Jan when he turned up at the door to take me home again.

Of course, I went through the motions of being pleased to see him: frenzied racing up and down; wagging my tail until it nearly dropped off; and sitting on his head. Don’t ask me about the last one because no-one, including me, has ever worked out how I managed to climb up his legs and torso, but I knew by the way he shouted ‘Get off, you daft mutt!’ that he liked it.

In the past few weeks, Jan has delivered Red Cross parcels to the garden gate of what has come to be known as Stalag Luft IX (formerly Folly Cottage). We have to pretend that she’s bringing meals for Himself, who is not allowed out, but we all know that’s only a pretext for bringing me a chicken dinner.

Decent food, delivered to the door, plus daily walks. Lockdown isn’t too bad for a small hound. But I do miss watching TV with Jan. Lady and the Tramp is my favourite movie, closely followed by 101 Dalmations and Call of the Wild. And I do love that One Man and His Dog programme where six sheep and a dog run around in circles trying to make a man whistle.

Himself says that I will be able to stay with Jan again, one day.

Captain Midnight here reporting from Folly Cottage, where I am currently holed up for the duration with Himself, who has taken to moping around singing the Folsom Prison blues.

I hear the train a comin’
It’s rollin’ ’round the bend
And I ain’t seen the sunshine
Since, I don’t know when
I’m stuck in Folsom Prison
And time keeps draggin’ on
But that train keeps a-rollin’
On down to San Antone

Actually, the weather has been beautiful, I don’t think he’s got any idea where San Antone is, and we’re miles from the train station. But he’s not one to let cultural appropriation and musical ineptitude prevent him from murdering a perfectly good song.

My fellow inmate delights in telling me that he is a melancholic introvert, so you’d think he would be happy to be in solitary confinement, wouldn’t you? I don’t mind the lock down at all because Himself is always around and I haven’t seen the inside of a kennel for weeks. Surprisingly, he still finds much to complain about.

He is only allowed out once a day…

He gets bored sitting around the house…

He has to rely on others to provide his food…

He only has me for company…

He badly needs a haircut…

Get used to it.

And very strange it is too!

Himself is spending even more time than usual in front of a computer screen, not just ‘being a writer’ (which was bad enough) but talking at it almost non-stop. Apparently, it’s called Zoom and it’s a new way of meeting people.

I thought ‘zooming around’ involved chucking sticks and running after them, but there seems to be very little movement involved. On the other hand, I can sit beside him on the sofa and rest my head on his lap while he is working, which is much better than going into kennels for the day.

He has a nice cup of tea and a biscuit whenever he wants and seems to enjoy talking to his friends on screen. I don’t get any biscuits because apparently I might ‘put on weight.’ Has he looked in the mirror recently, I wonder?

I have noticed that all his friends are very small and flat and I can’t work out how he keeps so many of them in that little machine on his desk. Anyway, you wouldn’t catch me meeting my canine colleagues on-line where you can’t sniff anyone’s bottom. How else can you tell friend from foe?

Himself says he doesn’t go in for that sort of thing and that you can tell your true friends because they listen to your troubles. I reminded him that listening to his troubles is my job!

I’m pretty good at it too.

This hornswaggling landlubber beside me goes by the name of George. Himself told me that he’s the new Cabin Boy and that I should look after him.

It was bad enough when George just sat on the windowsill ‘inspiring’ Himself to write (my job, surely) but when he insinuated his sorry carcass under the bedclothes the other night, I decided to forego my usual place of honour on the counterpane and huffed off to sleep downstairs instead.

I thought Himself would get the hint, but apparently not because the next day he posed us side-by-side on the sofa for a chummy BFF photo. I think my look says it all, don’t you? In fact, I was so deeply unimpressed with the whole business that half an hour later I took my revenge on one of His socks.

This time, I’m glad to say, Himself realised my displeasure at the presence of this fake-fur interloper. George was duly returned to the windowsill and I’m back to sleeping on the bed.

If I find him there again he’ll be shark bait, me hearties.

When the going gets tough

Let me make it quite clear that I wasn’t best pleased when Himself took this picture of me in the bath. I don’t mind bath time at all and happily jump in when I’m muddy for a warm shower and shampoo, but as you can probably see I’m actually quite clean.

Storms Ciara and Dennis have been chucking it down for days, seriously reducing the opportunity for decent walks. This afternoon, I was so bored that I joined Himself on the bed for a snooze, only to be woken up by strange noises in the sky. Himself said they were thunder and nothing to be worried about, but what does he know? It could just as well have been the four horsemen of the apocalypse warming up for Armageddon.

As a precautionary measure I abandoned the bed in favour of the bathroom. If the End of Days was coming, it seemed very sensible to surround myself with the protection of enamelled cast iron rather than a flimsy woollen blanket. Having shown the way, I waited for Himself to join me behind the shower curtain. Instead of which he almost fell over laughing.

‘When the going gets tough,’ he chortled. ‘The tough hide in the bathtub.’

Very funny, I must say!

When Himself said he was going on a Freefall Course and that I could come with him, I imagined high jinks at 15,000 feet – like Henry the paragliding Cockapoo in this picture.

Imagine my disappointment when we got to Hawkwood College and I was made to lie silently in front of the fire while a dozen people sat around listening to stories. It turns out that it was a Freefall Writing Course and that the only thing being done without a parachute was putting one word after another. I should have known better than to imagine Himself would ever jump out of an airplane. He seemed to be enjoying himself though. I think he must have a very low excitement threshold.

He asked me on the way home if I recognised his writing when it was read out. Naturally, I wagged affirmatively and gave his chops an encouraging lick even though it all sounds the same to me. Humans respond well to praise and learn new tricks more quickly through positive reinforcement, as the writing teacher herself clearly understood.

Once I realised that my dreams of skydiving were not going to be realised, I decided to enjoy the fire and to make the most of all the cuddling that was on offer. One day though, I shall pull on a parachute harness and plunge joyfully through the wide blue yonder. Until then, greetings from us all on the Freefall Writing Course in the Old Library at Hawkwood. 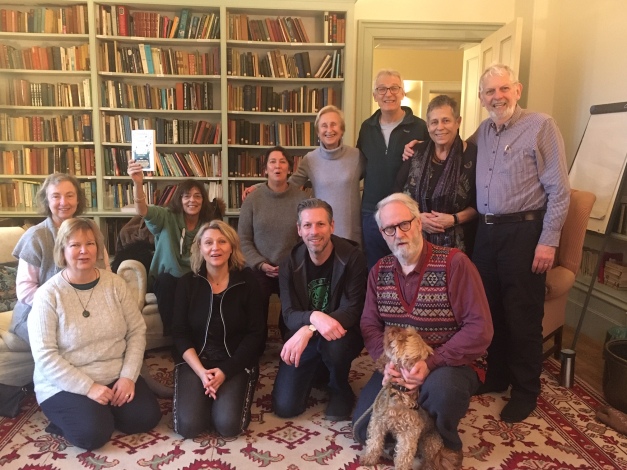 Try not to overdose on adrenalin as you look at the picture.

Captain Midnight here with greetings for the Birthday Boy.

When Himself says ‘Sit’ I usually give the matter some thought and then, like any self-respecting canine, I make up my own mind. It’s great fun: He stands there, arms crossed, while I decide what I’m going to do, then he shouts a bit and goes red in the face when I slope off into the garden.

Occasionally I do go along with what he likes to call the Voice of Command, just to see the look of surprise on his face. I can generally wheedle a treat out of him when I do this. If I had opposable thumbs, I could open the packet myself and then there’d be no need to feign obedience.

Last week Himself had a ‘big’ birthday so I agreed to sit properly for my portrait to be painted. It was a present from his daughter and it was a secret until the very last moment. He laughed when he unwrapped it, so I gave him a stern look. He apologised and told me he’d been thinking about something else that had tickled his funny bone.

I said that neither of us was getting any younger and that he should be happy to be having a birthday at all. He rather took the wind out of my sails when he replied that he was looking forward to us growing old together, so I jumped on his lap and gave both his ears a birthday lick.

Anyway, this fine portrait  of me in dress uniform now occupies pride of place in his study. I’m hoping he’ll eventually bequeath it to my old regiment –The Royal Bark-Shires – so they can hang it in the Officer’s Mess alongside the pictures of my old mates Fearless Freddie Foxhound and Brigadier Bertie (The Bonecruncher) Basset.

But not for a long time yet, please.