The rock formation known as the Sleepy Dragon stretches along the seashore, from Agios Pavlos to the tip of its tail at Triopetra. This morning I left the hotel room at 7.00am, walked down to the beach, skirted the lapping water, climbed the steep steps onto the dragon’s neck, picked my way round the rocky headland and dropped down onto the next beach.

From there, it’s easy going with one or two short clambers from bay to bay until you get to the taverna at Triopetra. As my legs found their stride, my mind went back twelve years, to the first time I’d taken that route.

I’d noticed her in the distance, a solitary figure beside the sea making salutations to the morning sun. As I drew nearer, I could see that she was naked. She saw me approaching and continued her yoga unabashed. The beach was very narrow at that point and I realised that I could not avoid passing quite close to her. I considered turning round and going back but that in itself would have made an issue of her nakedness. I decided to carry on, with my gaze focused on the path I was taking, neither ignoring her presence nor looking straight at her.

As I got closer, I saw from the corner of my eye just how archetypally beautiful she was: early twenties, I guessed; small regular features; long slender limbs; glistening golden skin; thick blonde hair loosely caught up on top of her head; breasts firm and shapely; buttocks rounded like pebbles smoothed by the sea.

She moved slowly, confident in her lissome beauty. As I walked past, she simply put her hands over her eyes and turned to face the sea to preserve her modesty. I didn’t say anything and I didn’t look back. If she was human, she was a flower in perfect bloom. If divine, then I had been blessed by a vision of Aphrodite and somehow lived to tell the tale.

It was a numinous encounter with the feminine, wondrous and respectful. I’m quite sure that she has never given me a second thought but the memory of that meeting is still so vivid in my mind that I could sense her shimmering presence on the sand, as I have done every time I’ve walked along the beach to Triopetra. 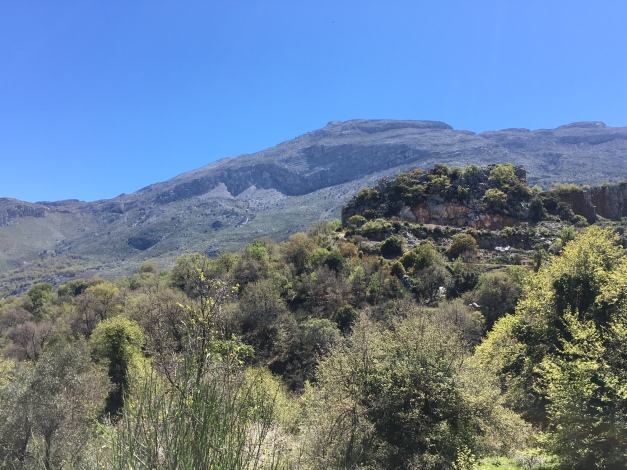 I went walking today, in the Amari Valley in central Crete. I’ve been here many times, often on my own for several weeks, to read, write and wander the mountain tracks from village to village. It’s one of my favourite places on earth: rugged, unspoiled and primal.

This time, I’m here with Hedda and a few stalwart friends but chose to walk solo, partly to reacquaint myself with old haunts and partly to re-calibrate my level of fitness after a long winter plagued by aching joints and minor injuries. According to the FitBit on my wrist, I walked for 5 hours 19 minutes; took 34,976 steps; went 26.13 kilometers; climbed the equivalent of 196 flights of stairs; and burned 5,279 calories. Not too shabby!

Once I’d got my second wind it was a delight to swoop up and down the valley-sides, though it was pretty hard going in places. In particular, I’d forgotten just how steep the final stretch was, cross-country from Vryses to Amari. I ended the day back at our lodgings, tired but with renewed confidence in my body.

More importantly, walking in that mythic landscape also reawakened my sense of wonder. At the mundane level of the everyday world, not much happened: I was startled by a dog; buzzed by bees; saw an aeroplane above Psiloritis; was greeted by a young woman; and given some cherries preserved in honey when I stopped for lunch. But the old gods are legion here if we open our eyes and ears.

Cerberus leapt snarling from Hades,
chained to a stake by the roadside.
Someday you will be welcome here,
he seemed to say, but not today!

Good old Hermes swarmed around
and buzzed me back onto the path.

In Meronas I met a mountain nymph
who fed me fat smiles and oranges
as Icarus soared over the mountain,
streaming contrails from his wings.

Aphrodite sat me down for lunch:
an immortal’s portion of ambrosia.

Friendly Sisyphus took the strain
as the road climbed up and ever up
from the depths of the last valley
to the welcoming arms of Hestia.

As I said before, not much happened on my walk today. 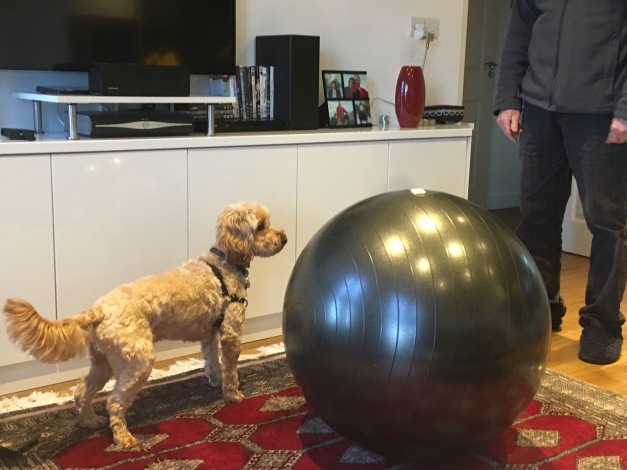 We called in on one of Himself’s old friends to discover this enormous bouncy thing in the living room. Himself yelled Fetch! then collapsed into an armchair clutching his sides with laughter when I moseyed up and gave it a nudge.

I knew it wasn’t a ball but I couldn’t work out what on earth you’d use it for apart from the unedifying spectacle of dog-bothering. If you look carefully you might even spot the morsel of cheese on top, which was supposed to attract my attention.

Yes it worked. It was cheese!

Fortunately the hilarity subsided fairly quickly and we were soon on our way home again, where balls are the proper size and we all know our place.

Himself chucks and I fetch.

I later discovered that the bouncy thing is for “bad backs.” I can’t say I’m surprised. Throwing that thing around would give anyone a bad back. Humans really aren’t too bright sometimes.