Captain Midnight here, and we are not amused!

Now, I take my duties as custodian of Folly Cottage very seriously and Himself decided it would be a good idea to tell visitors to the house that no-one gets in the gate without my permission. I wasn’t averse to him putting up a sign giving notice of my presence. You know the sort of thing: The Captain is Home – Superdog on Patrol – Be Nice to the Hound.

But not Crazy Dog.

He was laughing as he screwed the sign onto the gate. It was a smug rather superior kind of laugh. Presumably Himself thinks I can’t read French. He’s forgetting that I’m half Poodle. Je parle Français perfectamento.

What I can’t do perfectamento is operate a screwdriver so I’m looking for someone with opposable thumbs willing to remove the offending item for me and replace it with a little something I’ve purchased online from the Canine Defence League. 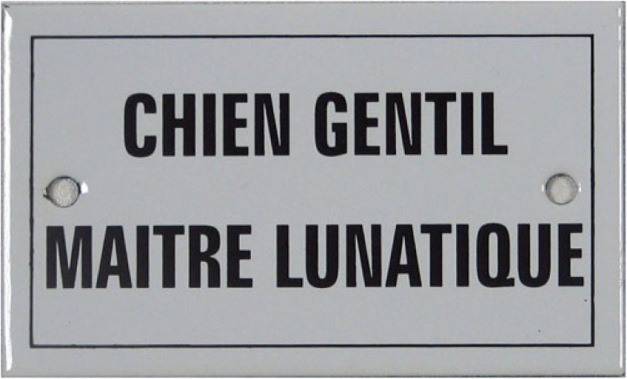 Himself has not, I fancy, heard the last of this one.