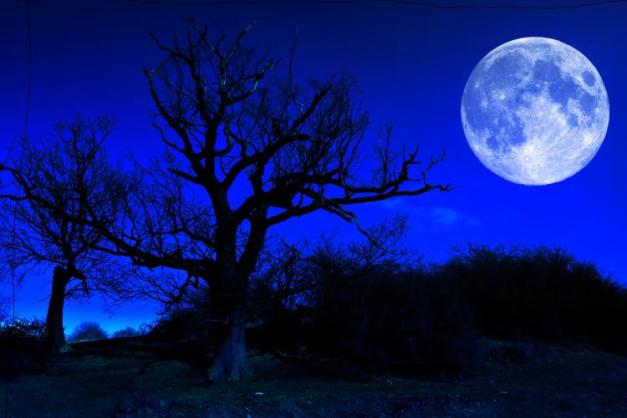 When Chris was in hospital last year, the sterility of the environment troubled her and she was constantly looking for any connection she could make with the more-than-human world. One day she wrote in her journal:

I can see the moon passing by the window at night.
It was coral and cornflower blue just after dawn

Now that’s what I call a blue moon worth seeing, not that I would have noticed with my poor colour vision. Personally, I love a crescent moon hanging low and fat over the horizon. Then you can clearly see that it’s not just a disc, but a three-dimensional sphere: our companion planet.

This year, Gifford’s Circus called their show Moon Songs. Chris and I adored Gifford’s and we used to go every year. For her 40th birthday, 40 of us had a champagne and strawberry picnic before the show and took over the whole of the Circus Sauce restaurant tent for dinner afterwards. When Tweedy the clown asked if it was anyone’s birthday, a four year old, a six year old, and Chris stuck up their hands. The whole audience sang Happy Birthday.

Kathy Skerritt and I saw Moon Songs 10 days ago. It was the first time I’ve been to see a Gifford’s show without Chris. I wanted to keep up the annual ritual but I couldn’t bear to go on my own, so I was delighted that our good friend Kathy could join me.

The show was not their best but it was still very good.

Seeing it was a bitter-sweet kind of sacrament.

Chris would have loved it.