Posted by geoffmead on July 11, 2016
Posted in: Uncategorized. 3 Comments 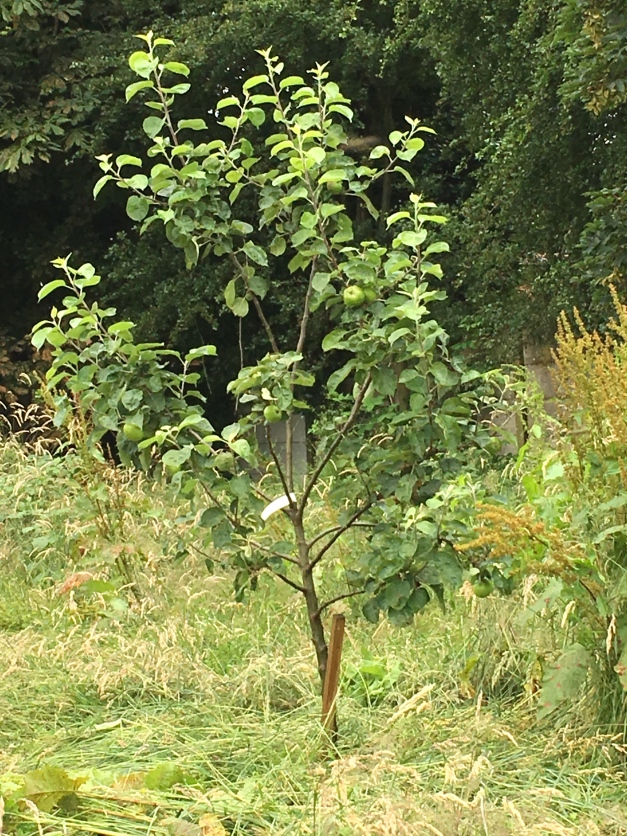 Chris loved apple pie. When friends asked her, during the last 6 months of her life, if there was anything they could do to help, she frequently asked them to make her an apple pie. Pies of all shapes and sizes were delivered to the house and to hospital wards. All were consumed with gusto and gratitude… and gouts of fresh cream.

Which is why, a year ago, Chris’s sister Helen and their mum Joan chose to plant a Bramley, queen of cooking apples, in her memory, in a secluded orchard a few streets from Helen’s house in Manchester.

I drove there today, with some of Chris’s ashes, to stay with Helen and her children Adam (20) and Rosie (17) and to visit the tree. Joan couldn’t get there because of a problem with her train but, after some to-ing and fro-ing, we decided to go ahead without her and that she and I would have a separate ceremony by the river at her home in Stratford-Upon-Avon, later in the year.

After lunch Helen, Rosie, Adam, and I took Ted with us to the orchard. Helen pointed out the tree, its slender young branches already bearing fruit, and I dug a small hole close to the base but far enough away so as not to damage the roots. The four of us took it in turns to mix some ashes with the fine dark loam then I re-filled the hole and tamped the soil down. Before leaving, we said a silent farewell to Chris: beloved daughter and sister; loving and generous aunt.

During her lifetime, Chris nourished the talents of all around her, from her artistic niece Rosie to her many doctoral students. Which made me think she would be pleased that her ashes will help the tree grow. In a year or two, with a bit of luck, it will produce enough shiny, plump Bramleys to make a good-sized apple pie.

I’ve already put in my order for a big fat slice.

3 comments on “Pushing up Bramleys”